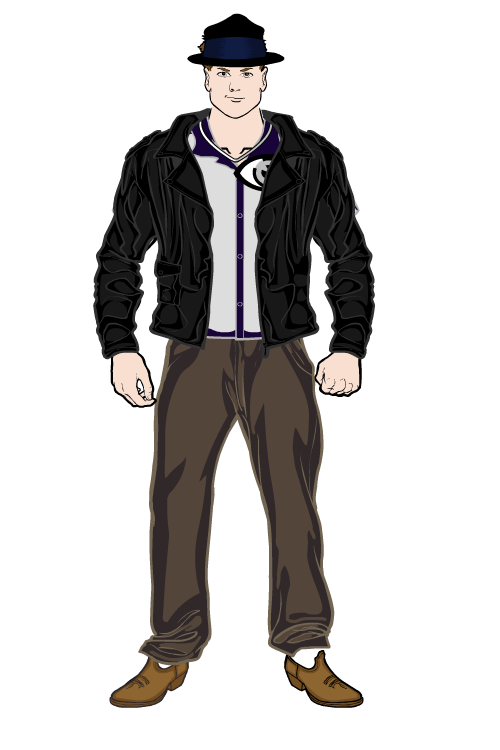 Houdini's costume is in his mind a less flashy version of a magician's outfit. He wears a black leather jacket, with a white design depicting a coiled viper emblazoned on the back. He keeps it open, and underneath he wears a short-sleeved grey shirt with a dark blue trim and buttons. Across the chest pocket of the shirt, there is an eye stitched into the fabric, with a silver iris. He wears loose brown trousers and smart shoes, also brown. Around his neck is a pendant in the shape of a diamond, which he wears all the time. His favorite part of his costume, however, is the blue-trimmed fedora that he wears as essentially a less flashy substitute for a magician's top hat. Instead of a mask, he uses his powers to mask his face while in costume, making it shift between several different faces. His eyes, however, remain the same. As a whole, his costume is designed to be easy to move around in, standing out slightly but still able to blend in to a crowd.

Powers: Houdini's main power is that of creating illusions, illusions so realistic that they can be heard and cause pain, or rather, the illusion of it, to his victims. He can also detect anything taking control of his mind, for instance, powers such as mind control, hypnosis or illusions from someone else. His agility and speed are slightly above what a normal persons should be, as well.
For causing physical damage, he carries a knife strapped inside his jacket, though he prefers to turn his enemies on each other.

Personality: Damian has separated himself from human emotion, tried to separate himself completely from his conscience, but never completely succeeded. Every time he attacks someone, robs or murders, he feels his conscience in the back of his mind. He wars with himself, and his own natural sadistic tendencies. He does however, have a natural charm when talking to people, and black humor that often shows itself in bad situations.
He is confident and cocky, sure of himself, and tends to boast, often revealing more than he should about a plan, or a skill he has yet to show his opponent. His cocky arrogance and taunting is what tends to make him lose fights.
Damian believes the key to gaining respect is power. He describes his philosophy as nature, 'survival of the fittest'. This philosophy is the reason he gives himself for the things he does.

Physical Description: Damian is fairly short at 5'6, weighing 152lbs, with a compact, muscular frame. He is 24, but his face looks about three or four years younger. He has white skin, and piercing blue eyes that are distinctive. His hair is medium length, light brown and messy. He has a fairly small mouth and ears, and an average nose.

History: As a young child, Damian made his carers quite nervous. Every time he cried, or was denied something, terrifying images would flash through their heads, nightmarish visions of demons, corpses and ghosts. As he got older, however, this ceased. But at the age of five, his parents divorced and he was left with his father. His father blamed Damian for the loss, saying she left because of him, that he was a demon, and started lashing out at him often. The images were the only thing that got him to stop. It was perhaps this that led Damian to his conclusion about power; the only thing that mattered was where you were, at the top of the food chain of the bottom.
Damian was always a 'problem child'. He was involved in numerous incidents in several schools connected to bullying and assault. After one incident, the police took him in for questioning, but they couldn't find any conclusive evidence linking him to the crime, a knife attack outside the school grounds.
At sixteen, he finally ran away from home, and rented an apartment, using his powers to convince the landlord that he'd paid, and was still paying the rent on several occasions. He eventually created illusory documents stating that he owned the place, and now lives there in between acts of villainy.

Misc. Notes: Damian's apartment is located in the Commercial district of Aurora City.