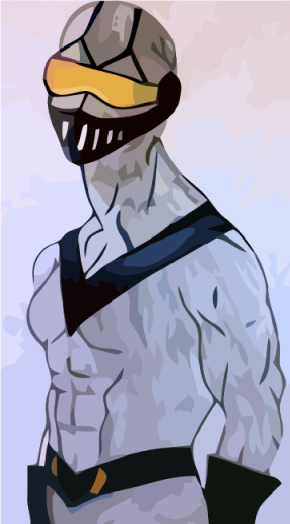 (New art program, I hope I did a good job making this...)

Powers: His weapons practically give him powers.

Personality: Typhon is usually a very quiet criminal, he only chats with the Crimson Witch. It is hard to grain his trust and his friendship. He knows his surroundings which makes him extremely hard to surprise. He can seem emotionless at times because you can't see his face and because of his silence. When he is working on inventions you shouldn't disturb him. He won't listen to anything you say if he is in the middle of building something.

Physical Description: He has a muscular build and stands at 5'11". If you see him without his costume he will have dark brown hair and hazel eyes.

History: Stephen Dylan Lefreve grew up with his Italian parents in New York City. His father owned a clock shop where Stephen learned how to create and invent trinkets when he was only ten years old. Stephen did share his father's passion for inventing, but the things his father would allow him to invent weren't as complicated as Stephen wanted.

When Stephen turned sixteen he already had hundreds of new inventions he had put together in the basement. However, they were inventions his father would not approve of because those inventions were dangerous. Clocks were his father's favorite things to fashion, but weapons were Stephen's favorite.

When Stephen moved out he started to make and sell weapons for the army, but they soon fired him from the job because some of his inventions were far too deadly if not handled right. However, a assassin team was interested in his weapons. There, he met The Crimson Witch who was known as Alyssa at the time. He befriended her and then, after a while, he wanted to be more than just friends. Alyssa told him she just wanted to be friends because she thought of him as her "bodyguard/big brother."

When Alyssa quit the assassin team and moved to Aurora City he followed her. He moved into a abandoned clock repair store (Coincidence?) in the Financial District.

With many new ideas he began to invent the most advanced weaponry the world has ever seen. Stephen didn't want to sell these weapons, he wanted to use them himself. He really didn't care who he hurt or what he destroyed, it was just too much fun to watch his inventions work so smoothly.

Misc. Notes: He has a tattoo of a dragon on his left shoulder. (See avatar)
He named himself Typhon after the most deadly monster in Greek mythology. Info.

Similar topics
» Hero Factory 3.0
» What MLP Villain is the person above u?(GAME)