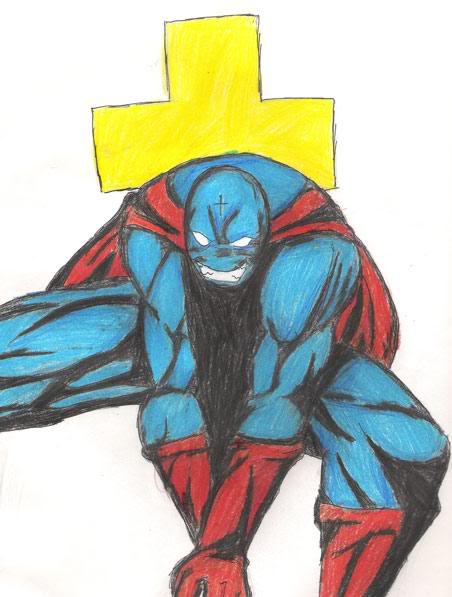 Personality: Jovial, but hard working. Devoted, but fucking insane.
Powers:None, but he is very agile and somewhat stronger than his physical appearence may seem.
History:He ran a small church in the slums, which had no real followers, so he spent most of his time handing out copies of his own "True word of the true God" Bibles, which were edited to what he said was what God told him was truely accurate. He also preached on street corners about the real warrior of God, the recently arrived hero Brazen Bull, and how heroes like him were doing the real work of the lord. It was during one of these surmons that he witnessed a purse snatching. He hunted down the criminal and returned the purse to the owner. The owner thanked him and called him a hero. Jack took this as a sign that God had choosen him to be a superhero like Brazen Bull. So he bought cloth and sowed a costume and called him self Blue Sunday, because his suit was mostly Blue and he loved Sunday mornings. So with a police scanner, stolen out of a parked cop car, he set out to kill as many criminals as he could, so they could be judged and punished by the lord.
Other info:Jack's hair is cut into a unkept mohawk and he is in peak physical conditon, due to his years of trainning, which he did, you know just incase God needed him.