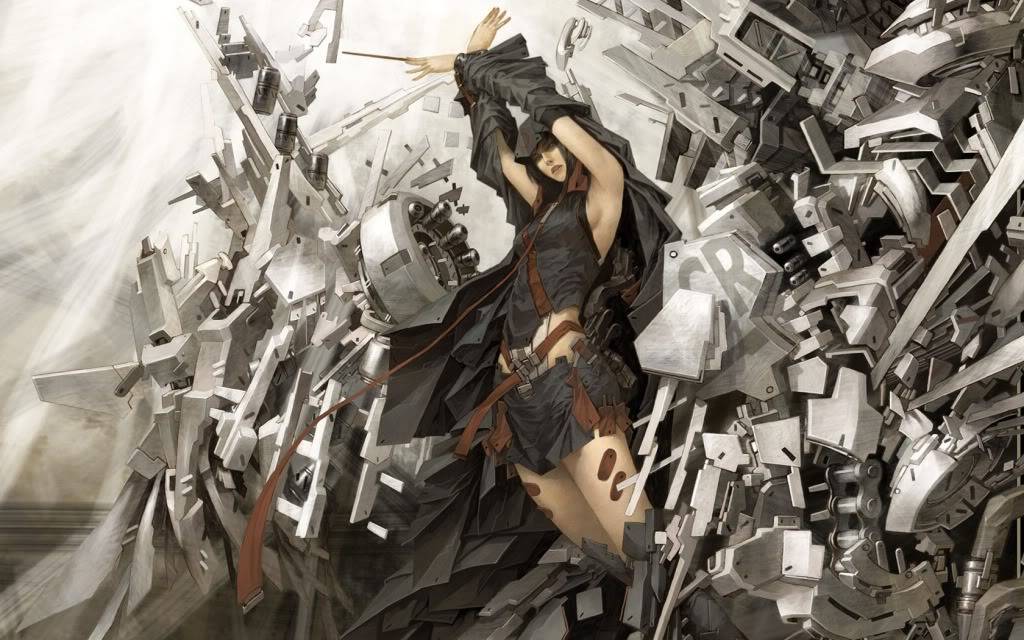 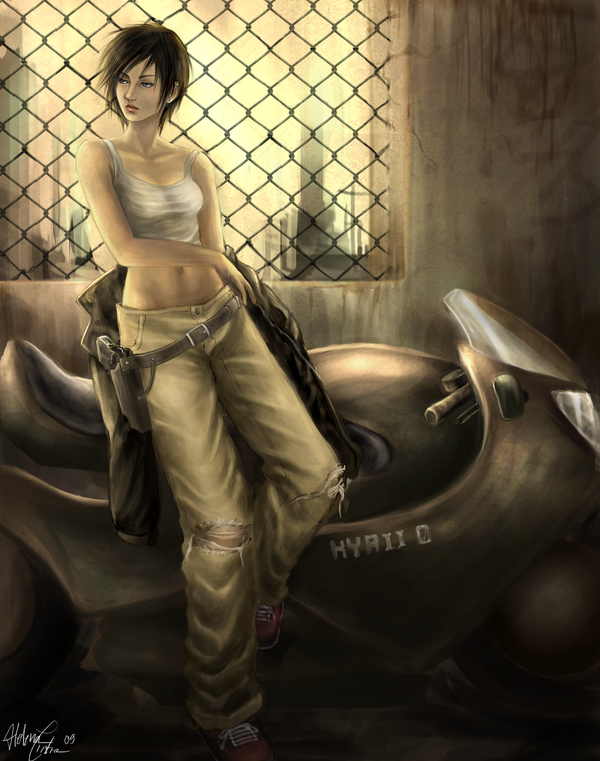 Personality: Lina is a loner and really hates trespassers. She'll do anything underhanded to get what she wants, as long as the job gets done. She's also a minimalist, and not very picky about what she uses. If a simple crobar gets the job done, why go further?

History: Lina grew up in the scrapyard that her father, Rurik, owned. After the fall of communism, Rurik moved to Aurora City from Russia with his wife Maria, who had given birth to Lina in Aurora city. Rurik also brought with him a motley gang of Russian laborers, who created a low-scale mafia organization who used the scrapyard as cover for their work. As Lina grew, she got used to the henchmen, the broken down cars, and the machinery that crushed them. Her father did not let her work for him, but she did use the scrapyard to give her a self-tought education in mechanics. When she turned 16, she built her own motorcycle out of the old scraps in the yard. Even though it was old and rusty, it ran as good as any new bike on the market. Her father didn't mind, since it kept her mind off the corruption of the mafia. He even encouraged her to ride it downtown whenever she was out of school.

On a day that was supposed to be a happy moment in her life, her final day of high school, she returned home to the scrapyard to give the good news to her parents. She was graduating! She raced her bike faster than she ever had before on the highway, which led to her evading a small police chase. That was just normal, every-day crap to her though. After she'd given the police a good run and left them eating her rust, she found her way back to the scrapyard, gunfire, and blood. Her motorcycle slid to a stop into the side of a black Italian luxury car that had never been seen there before. She hid out behind the wreckage near her father's main office until the gunfire died down and the screaming stopped. Two men in black suits and ties left her father's office and tucked their 9mm pistols in their jackets.

Lina panicked and jumped on her bike, which only alerted the men to her presence. There were not supposed to be any survivors. Lina took off at full-speed into the maze of broken cars, and the shiny black car took chase. She was easily outrunning them, since her bike could fit between smaller spaces in the yard and the car had to ram its way through a few tight spots. But when she was about to get away, a gunshot came from the car window and took out the front tire of her bike. Lina screamed and swerved into a tall pile of wrecked cars, which caused them to come crashing down on top of her. The two men left her there to die.

But Lina did not die there. While she laid under the heavy wreckage in a puddle of oil and grease, she discovered that she only had a few broken bones. Her bike was totalled, but she still lived! The grease she laid in had an odd glow to it, and a funny smell. But she didn't mind much, since she practically lived in grease and oil. When she was about to pull out her old 90's brick of a cell phone (daddy's last birthday present), an old car battery fell loose from the car on top of her and landed in her lap. The wires snapped, and one fell on her while the other fell in that strange grease spill.

Lina awoke in a nearby hospital under close supervision by the police. While she recovered from her broken bones there, she was manipulated into giving the police all they wanted to incriminate her family's mafia as well as the people who had killed them. But only her father's remaining men were ever arrested. After the hospital and the police released her, Lina vowed that she would never leave justice to the authorities ever again. She would bring justice to her parents' murderers herself. That was before she realized her new powers...

Weaknesses: Has no control over high-tech devices. Otherwise, she has normal human weaknesses.
Addiction: She is addicted to cocaine, but tries to keep that behind closed doors.
Likes: City low-life. Bars. Alcohol. Drugs. Dogs. Motorcycles.
Dislikes: Any form of authority, namely the police. Italians. Upper-class citizens.
Hobbies: Anything that involves grease and a wrench. She has a number of vehicles she has made out of scraps.
Common weapons used: Guns, crowbars, baseball bats, chains, brass knuckles, knives, shovels, metal rods

(I hope its alright for me to use someone else's art here. It fit my character perfectly, and I am a horrible artist. I gave them credit though. Looking forward to playing with y'all)